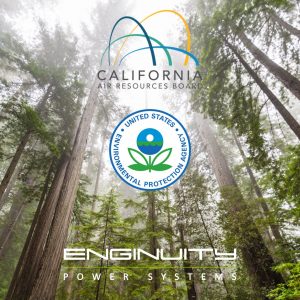 “This is a key development critical to our mission of selling the E|ONE to homeowners across the United States,” said Jacques Beaudry-Losique, President of Enginuity Power Systems. The E|ONE will provide electricity, space heat, and hot water for the home while allowing the homeowner to choose to operate on or off the electrical grid.

“Meeting small-engine EPA and CARB requirements was a major milestone that we had targeted prior to installing the E|ONE in a research house that emulates real-life occupancy,” said Beaudry-Losique.

That installation will take place later this year as part of an $800,000 Cooperative Research and Development Agreement (CRADA) with the U.S. Department of Energy’s (DOE) Oak Ridge National Laboratory, sponsored by the DOE Building Technologies Office, to help develop the E|ONE and speed its commercialization.

“We believe our engine technology, and the upcoming E|ONE system it drives, have the potential to be game-changing technology,” Beaudry-Losique said.